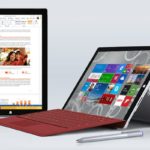 On June 20, 2014, Microsoft released its latest entrant in the crowded tablet computer market.  The Surface Pro 3 competes with both traditional laptop computers along with the iPad and other tablets.  The Surface Pro 3 is somewhat bigger than its predecessors (SP1 and SP2) and Microsoft is touting that “bigger is better.”  (See Tony’s article from last year about the Surface Pro 2.)  Their goal is to replace all the functionality of a laptop while having all the benefits of a tablet.  Now that the industry has over 6 years of tablet usage in the business market, they may be onto something.

Here are some highlights and comparisons against other models. 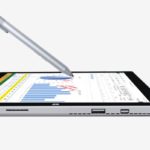 Compared to MacBook Air:  Surface Pro 3 has a touch screen, detachable keyboard option and stylus that you can use to write free-form (great for taking meeting notes).  Since it has Windows 8.1, it can run the same version of Microsoft Office that your current computer runs and the look and feel will be what you’re already used to using.

Size Matters: Microsoft took a decidedly different approach to this version than in previous models.  While most competitors’ products are getting smaller (e.g. iPad mini), the SP3 has a 12” screen.  This compares with the smaller 10.6” display for the SP1 and SP2 and is closer in line with the MacBook Air’s 11.6” screen.  Traditional laptops generally have 13” – 15” screens.  The weight of the Surface is less than half of a traditional laptop and slightly heavier than an iPad.

USB port: If you’re like me, you are always needing quick access to a USB stick, whether it’s showing a presentation or transferring a file.  The SP3 has a built-in USB 3.0 port to accommodate all your USB stick needs.

Models: Microsoft has rolled out 5 models of the Surface Pro 3, the difference being processor, memory and hard drive capacity.  The entry level model is priced at $799 and comes with an i3 processor, 4GB RAM and 64GB of hard drive space.  The top end model costs $1,949 and has i7/8GB/512GB.

We think the Surface Pro 3 is a significant improvement over the tablet and has enough laptop-like features to be a solid replacement for both.  Whatever your needs, for your law firm, medical practice or even your personal home usage, we expect to see continued gains in the business market segment for this great new product.  The initial reviews have been very positive and we recommend people test drive at your local Microsoft store (there’s one in Lenox Mall).