Tuesday Tip: Know EXACTLY When Rain Is Coming with DarkSky

How many times have you been at an outdoor activity and been worried about a threatening raincloud?  Or when was the last time you were caught by a rain shower unprepared?  Wouldn’t it be great if you had an app that would tell you, down to the minute, when rain was going to hit in your area?  Well, there’s an app for that.

Enter DarkSky, an app that calls itself “hyperlocal weather.”  While most of us use the app from Weather.com to see what the forecast is, this is a very general forecast for a widespread area.  Instead of just showing what the percent chance of rain is in your area, like Weather.com, DarkSky tells you if and when it’s going to rain right where you are.  When it really comes down to it, don’t we just want to know what the weather is going to do exactly where we are anyway?

DarkSky was funded by a Kickstarter campaign four years ago.  In January, the team released a completely rewritten version.  The idea behind the app is it uses GPS to locate where you are at the moment (you’ll need to let DarkSky access Location Services on your iPhone).  It tells you what is going on right now and in the next few minutes.  My favorite feature is a message that says “Light rain will begin in 3 minutes” or something similar.  Now that summer swim team is in full gear (read this article about Tracking Your Kid’s Sports), knowing where the nearest rain is located is very important.  I’ve been using DarkSky for about 6 weeks and the app is amazingly accurate.  Sure enough, when I see a message that rain is about to begin, it starts to rain.

It has a very slick and simple interface with three screens: 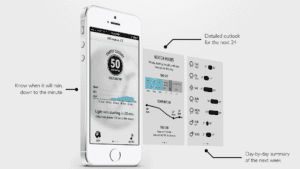 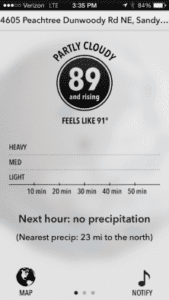 The main screen is the money maker: it shows the current temperature, the precipitation for the next 60 minutes in your area, and a message about when rain is going to start or stop.  It’s amazingly accurate.  Another cool message on the main screen is how close the nearest rain is.  Hey, you might want to know this or just impress your friends.  “Hey, guys, we are in good shape!  The nearest rain is 23 miles away.  It’s perfectly fine to play a round of golf.”

The other two screens are helpful but not the main reason you get the app.  They show a 24-hour forecast for precipitation and temperature, along with a cool graphical depiction of the temperature range. 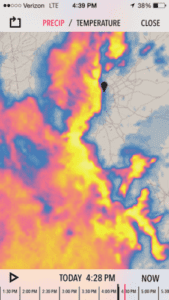 The precipitation map is pretty slick as well.  It’s a much nicer version of what you have come to expect from Weather.com and other apps.  You can put the map in motion and have it show the upcoming hours as well.  This is helpful if you want to see what’s heading your way.

DarkSky built its own backend database that aggregates weather data from various sources such as NOAA and the U.S. Navy.  Currently DarkSky is only available in the U.S., the U.K., and Ireland due to licensing radar costs.

The only downsides are that the app costs $3.99 as a one-time fee, and it is only available on the iPhone platform.