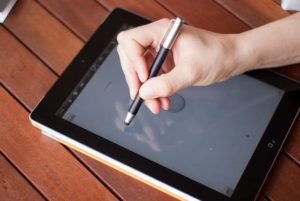 After using my iPad 2 to take handwritten notes for over three years, I thought I’d step back and see if there were any other handwriting apps worth switching to. I like my handwriting app, Noteshelf, but in the world of technology a lot of things can change in three years. My main three criteria for choosing a handwriting app hadn’t changed over the last three years, except that #3 became more specific:

iPhone J.D. was the first place I turned to get a short-list of good handwriting apps. This is a blog for lawyers that use iPhones and iPads. Jeff Richardson, a practicing attorney, started the blog in 2008 and I’ve been following it since 2011. I’m not an attorney, but with as much as attorneys write, type, dictate and speak, I knew iPhone J.D. would provide me with a good short-list.

First, choose a good stylus. This is almost as important as choosing the right app. The one I’ve been using for 3+ years is a Wacom Bamboo Stylus. I still like it and it works fine with the original, soft nib. However, from what I’ve read, the first generation stylus I have drags more than the third generation styli that are out there. Wacom Bamboo has two new-ish styli that have caught my eye: 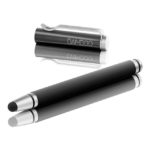 The Wacom Bamboo Stylus, third generation. The differences between this one and my first generation one are subtle to the naked eye. The big functional difference is that the rubber tip – or nib – on the third generation stylus is covered with a thin layer of carbon fiber. This supposedly makes a big difference in the feel, sensitivity and drag on the screen. 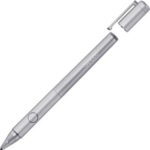 The Wacom Bamboo Stylus fineline would be a step up in price, functionality and feel. It’s an active stylus which means it’s smart with the tip communicating with the iPad (most, like this one, use Bluetooth). It has a hard tip that glides more easily over the glass. And it has a button that can be programmed to do simple tasks (such as undo). It’s more expensive than a traditional stylus (about $50 vs. $15) and doesn’t work with an iPad 2 so I won’t be getting it right now. However, when I upgrade from my iPad 2 I’ll definitely be in the market for this active stylus.

Here is a thorough review of the Bamboo Stylus Fineline which also contains a link to a review of the Bamboo Stylus third generation. I’m going to stick with my first generation Bamboo Stylus with the regular soft nib for now. I’ve read that there are firmer replacement nibs that, you would think, would have less friction than the soft nibs. However, you have to apply more pressure to the screen with a firm nib which leads to as much, or even more, drag as a soft nib.

I’m currently using Noteshelf (the old icon is on the left; they just came out with the new icon on the latest release). My biggest surprise (pleasant) when I looked at this app with fresh eyes is the automatic sync with Evernote. This is a huge plus for me. Previously, I’ve had to select a specific page and export that single page to Evernote. Now I can mark an entire notebook to be synced with Evernote which it does automatically in the background. This sync works great. When I make an update to an already existing notebook I noticed that it takes 1 to 5 minutes to show up in Evernote. This is a one-way sync; only from Noteshelf to Evernote. I point this out because it’s important to know that this function does not take the place of having a good backup from which you can restore apps and data. I use iCloud to back up my entire iPad and iPhone.

Note: I have an Evernote Premium subscription ($45 annually); the sync works fine with the regular, free Evernote account but the amount of information that can be imported / stored in Evernote is limited with the free account.

Here’s what the zoom window function looks like which is a must-have, ease-of-use feature for me. I write in the zoom window below and the writing shows up on the full-sized piece of paper above. The zoom window automatically moves over to the right when my writing gets to the gray portion of the window. 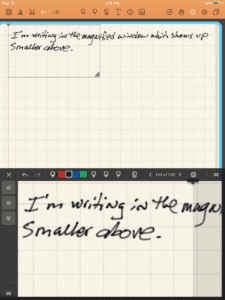 You can import PDFs to annotate, mix typed and written text on the same page, insert or take a photo, and tag pages if you like (note: these tags work in the app only and don’t export to Evernote). And you can export to Dropbox or Google Drive (and iCloud backup is enabled via the iPad). These are true exports and not the behind-the-scenes syncing that it does with Evernote. The app costs $5.99 and the Evernote sync capability is an additional $1.99.

Here is a brief description of five other handwriting apps that were on my shortlist to explore. This is not an exhaustive review of each app (you can find plenty of them on-line); rather, it’s a short summary of each. 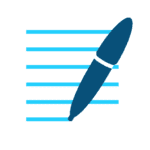 Jeff Richardson, the iPhone J.D. author, switched from Note Taker HD (see below) to GoodNotes after trying it in 2012. The key criteria for his switch is the overall ease-of-use and the writing feel combined with the power of the app. It basically does all of the things that Noteshelf does with some nice additional features such as OCR search, automatic backups to Box, Dropbox, Google Drive or SkyDrive and some nice ease-of-writing features. However, the one notable (and big) exception for me is that it doesn’t sync with Evernote. This is my handwriting app of choice to switch to if/when they add a sync function to Evernote. The app costs $6.99. 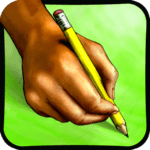 Very powerful… and complicated. With all of that functionality horse power, Note Taker HD still has a quick responsiveness which translates into a good writing feel. Most of the people who have taken the time to really learn this app, rave about it. However, the learning curve for this feature-rich app is daunting (although less so now, with user interface updates, than it was 3 years ago) and one feature it does not have is synchronization with Evernote. The app costs $4.99. Here’s a fun factoid for any IT history buffs: this app was designed and programmed by Dan Bricklin, the same person who introduced VisiCalc for the Apple II in 1979. VisiCalc was the first easy-to-use spreadsheet software and is credited for accelerating Apple II sales as the first “killer app”. 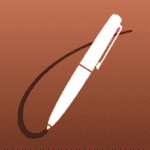 Killer feature alert: convert handwriting to text. If this is important to you, then you need to try Notes Plus. From what I’ve read, the handwriting-to-text conversion is quite good. This is a powerful app with a ton of features which is good, if you use the features, and bad since the all of the features tends to slow down the app. A little delay with a handwriting app really infuriates some people while others get used to it and move on. Alas, all of those features but no sync to Evernote. For attorneys, this app was recommended in an ABA Journal article: Top iPad Apps for Lawyers. The app costs $9.99. 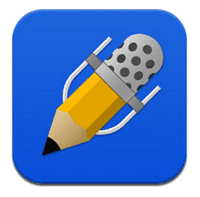 As the icon to the left suggests, Notability does a good job linking audio recordings to your handwritten notes. Although some other handwriting apps have this feature, Notability was one of the leaders in this area and does it very well. If you’re looking for audio annotations linked to your notes, look no further. As far as other features, they are pretty much the same as the other apps that have been reviewed (no sync to Evernote, of course). This app costs $2.99. 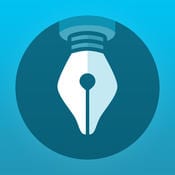 Finally, another handwriting app that syncs with Evernote! Penultimate was purchased by Evernote in May, 2012, so you would expect a tight integration. This is a basic handwriting app that is reportedly a little sluggish and not well-suited for a power user. The biggest feature that’s missing, from my list of must-haves, is a zoom window. I downloaded and tried Penultimate in 2013 for about a week but found that I just couldn’t live without the zoom window. This app is free.

To recap, here’s a list of each app along with what I see as their biggest differentiator: