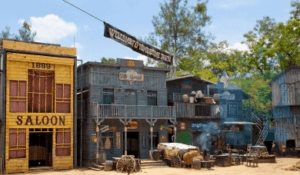 For years now, many people in the IT industry, including us here at Network 1, have referred to Cloud Computing as the Wild West.

What we mean by this is that there are many companies out there touting their Cloud services, including large companies, such as IBM, Amazon and Google, and small fly-by-night companies who might have a single server running in the basement of their house.  Of course, there is everything in-between.

Customers have had a variety of experiences with their Cloud partners, including both fabulous and disastrous results.  Of course, the great outcomes don’t make the headlines and, suffice it to say, many customers have great results.  But there have been some frequent and lengthy outages by certain Cloud providers.  These outages are disruptive to the customer’s business and can make for a real headache, but at the end of the day, overall business operations get back in the swing of things.  But there have been some bad experiences.  Real bad.  About the worst thing that can happen to a Cloud provider is that it gets permanently shut down, as in the case of MegaUpload.com. This can be disastrous for medical practices, law firms, or really any type of business.   MegaUpload was a website that was, at its core, a cloud data storage provider.  Some of the data stored on its servers was owned by legitimate businesses, non-profits and individuals.  Other data was not so legitimate, pirated videos being the main culprit.  The United States Department of Justice determined the site should be shut down due to routine violations of U.S. law.  And so they did.

Now imagine being a business owner with important data or applications on which you depend and they were suddenly and, to your knowledge, permanently made inaccessible.  Now THAT’s a bad day.

Recently, another Cloud storage provider shut its electronic doors.  Although not quite as abrupt as MegaUpload, Nirvanix sent a letter to its customers informing them that they were winding down their operations and that customers had a few weeks in which to migrate their data to another provider.  Wow!  That can be a bit disruptive to a customer’s business.  Well, at least they sent a heads up.

So the lesson is clear:  choose your cloud provider wisely.  Ask lots of questions about the company’s financial health and service outage history.

And now about puppies!  Yes, the real, warm, soft cuddly kind and you don’t have to fear them.  The Gracey family spent the weekend puppy shopping.  (yes, there is a technology link here….wait for it…)  After we worked through the mourning process of having to put down our 16-year-old dog, Bean, last June, we slowly began to consider life with another dog.  (Actually my 7-year-old, Laura, asked the afternoon we put Bean down when we could get a “new” one).  Being the pound puppy kind of family, Louise began asking around at local veterinarians about puppy litters that may be in need of a good home.  We finally ended up at the North Atlanta Humane Society located just off Mansell Road .  This place was fabulous!  It was clean, spacious and had great areas for dogs and cats to play.  With Louise’s scouting report in hand, we loaded up all five Graceys (and one friend) and headed north.  After about an hour we adopted a sweet black lab/retriever/whatever mix and named her Luna.  My neighbor, “Barry”, thinks it’s 95% dachshund.  I don’t believe it for a second but I do find it interesting that just about all the dogs out there were lab mixes.  Hmmm. 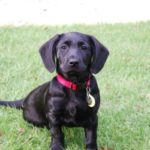 I learned that all dogs that come through the Society have an embedded microchip under their fur that contains a tracking number.  Sort of a doggy LoJack.  So if Luna ever gets found, she can be scanned and quickly returned to her happy family (see, I told you there was a tech link).