For those of you who use dual monitors in the office, you know how much more efficient you are when you get a second (or third) monitor for your office.  Once you get used to dual monitors, you get spoiled.  I’m sure there are times when you’re away from the office and you are working on your laptop, and you are dying for that second monitor.  The problem is that no one wants to haul around a monitor to connect it to your laptop.  A great solution to this annoyance is to make your iPad a second monitor for your laptop.  Most people who have laptops also have iPads.  Despite the clamor to move to iPads years ago, they have become niche devices primarily for checking email and browsing the Internet.  But to do any serious editing of documents or composing long emails while away from the office, the laptop is still king. 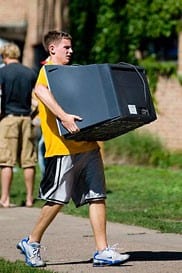 The biggest complaint about this type of solution is the response of the second monitor (iPad) isn’t as crisp as an original display.  This solution is great for business use but not so much if trying to manipulate advanced graphics (although some folks use it for photo editing and keep their tools up on the iPad while the laptop screen does the hard work).  The actual screen is pretty sharp but the latency is usually caused by the relatively slow connection that the network provides.  Video signal just doesn’t transmit as well over the air when compared to a wired connection.  The general idea here is that the second monitor won’t be used for major graphics rendering but will be used to keep a second application, such as Outlook or Word, going while another application is running on the laptop’s screen.  For that, it’s fabulous.

Here are the names of a couple of leading iPad monitor apps, both available for Mac and Windows.  They cost around $10, less than the cost of an adapter to hook up a second monitor, by the way:

Although there are several iPad apps that perform this function, they all use the same protocols to connect and behave in a similar manner.  Here are the basic steps for installation:

So if you are a lawyer or financial guru on the road and want a lightweight second monitor, consider this solution and improve your productivity.  You’re taking your iPad with you anyway, so why not put it to good use?