When I think of updates and security issues with software, the first thing that comes to my mind is ‘Microsoft’.  When someone says ‘Apple’, I generally think of a pretty locked down system and Mac users that always tout that they’ve “never had a virus on their computer!”

Well, on Friday February 21st, Apple announced a flaw in their iOS operating system (used on iPhones, iPads, iPods, etc.) as well as a corresponding update that fixes this flaw.

The flaw involves Apple’s implementation of the encryption protocol used to protect secure connections across the Internet.  If you use an iOS device to connect to your business network, business email, personal email, to do online banking, or for other purposes that require security relative to communication across the Internet, you should update your iOS device(s) immediately.

If you work in the medical field you’ll want to pay special attention to any staff members that carry Apple products (whether they are owned by the practice or the employee).  Make sure they are taking the steps to get them updated as this has the potential to put you out of compliance with HIPAA regulations and guidelines.

The update process is straightforward, requiring a few clicks, a brief download/configuration and an automatic restart.  Instructions to update can be found below.

Additionally, Apple announced that this flaw exists in OS-X (the operating system used on Apple desktop and laptop computers).  Apparently the 10.9.2 version update now corrects this issue, but I have recently read some articles that claim that the update has affected some other applications commonly run on Macs.  One of these is AirPlay Mirroring which is a feature that allows you to mirror what is on your Mac screen to an HDTV wirelessly with Apple TV.

Despite annoyances such as this, the update is far more important and you should make sure that your Mac is updated.

The following articles provide additional information about this update and its significance: 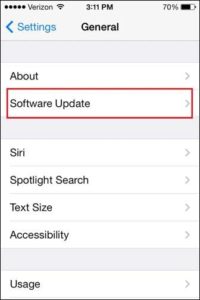 5. Press “Install” or simply wait for the install to begin:

For additional information on staying up to date on other mainstream applications that are notorious for releasing important security fixes, check out a blog I wrote on keeping your Java and Adobe applications up to date.