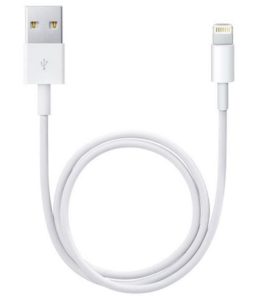 I’m writing this week’s Tuesday Tip in honor of listening to my co-worker, Cheryl, complain for weeks about how her new iPhone 5C had started losing its charge after only 3 months.  I told her it was a lemon and that she needed to take it back right away.  But Cheryl, being the conscientious person she is, called Apple tech support and jumped through all the hoops which included just about everything from turning off Bluetooth, wireless and location services to minimizing screen brightness, doing a battery test and performing a factory reset.  After all these efforts, it still was draining the battery like a waterbed that just met a lethargic hedgehog!

It wasn’t until after Apple finally agreed to replace the device that the question of third-party USB chargers came up, something of which Cheryl had been using right around the same time that her phone started to have battery charge issues.  Uh-oh!

Now I’m not saying that all third-party chargers have problems, but in retrospect, I too have had my fair share of challenges with them in the past.  On more than one occasion I’ve seen this message on my iPhone when not using an officially approved Apple charging device; perhaps you have, too.

For years, Apple has regularly recommended against using third-party chargers and cables.  They even went so far as to launch a third-party power adapter recycling program, following the electrocution of a Chinese woman allegedly caused by a counterfeit charger.  So, does that mean that you can’t buy and use the cheaper alternatives – of course not.  What I am suggesting is that where there’s smoke there’s fire (no pun intended). 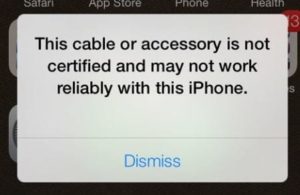 Case in point – about two months ago, my ex-wife bought two 10 foot third-party charger cables off of Groupon – I think she paid about $5 for each of them.  Within a week she had returned them because the charging was hit and miss.  Sometimes she would plug in one of the kids’ iPad Minis, only to discover the next morning that the device had not charged at all.  Fortunately for us, the iPads didn’t get damaged.  My suspicion is that perhaps Cheryl’s iPhone was the unfortunate victim of one of these accessories and it damaged her phone.

In doing some additional research on the web, I found that according to a UK repair company called mendmyi, cheap third-party iPhone chargers and USB cables have been suspected of damaging the chips on the iPhone 5, which can lead to all sorts of issues such as preventing the device from powering on and the battery losing its charge much faster than normal.

You definitely have to be careful about the electronic items you buy today. Check out last week’s tip on the dangers of using the wrong USB thumb drive.  So when it comes to buying charging cables you’re probably better off paying for the Apple approved accessories versus the cheap third-party ones.  I know that the amount of time that Cheryl spent wrestling and stressing out about her phone probably paid for Apple chargers for many years to come.