Tuesday Tip: Electric Cars – the Times, They are A-Changin’ 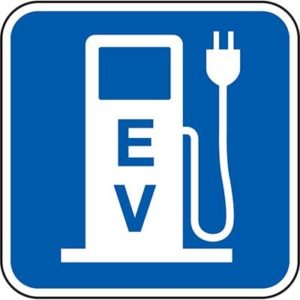 The all-electric Tesla Model 3 (costing at least $49,000) was the 4th best-selling passenger car in the U.S. last month – and darn near passed the Honda Civic for 3rd place. Can you believe that? The Model 3 outsold the Toyota Corolla, Hyundai Elantra, Nissan Sentra, Ford Fusion, Kia Optima – all gas cars. It outsold the Toyota Prius, the top-selling hybrid, over 3-to-1. And what makes this even more amazing is that every other car in the top 15 list sells for less than half the price of the current Model 3. Times are a-changin’ indeed.

When I started leasing the Nissan Leaf Electric Vehicle (EV) back in 2014, I was somewhat of a pioneer (although the Federal and State tax credits, plus the relatively low cost of the Leaf, made my financial decision easy). After driving the Leaf for a few months, I became an EV fan. By 2015, I was researching EVs to see if there were any with enough range so I could sell my old gas car (the Leaf only went 85 per charge). I found the Tesla Model S and absolutely loved the car and its 230+ miles of range – but cringed at the $73,000+ price. Plus, the Tesla Supercharger network was still getting built out and was spotty. So I decided to wait for Tesla to announce its EV for the masses: the Model 3.

As the Model 3’s September sales results show, Tesla’s EV for the masses is definitely popular. However, does this signal a “tipping point” (great book, by the way) for electric cars? I think so, due to 4 factors: price, range, charging infrastructure/speed, and competition. Note that I don’t list performance or reliability as a factor; that’s because Tesla, Chevy (the Bolt), and Nissan (the Leaf) have already shown that multiple companies can deliver. Now let’s look more closely at each of these factors.

How many miles can the EV go between charges? This makes the difference between a commuter car and an everyday car for commuting, getaways to the mountains, and beach and family vacations. Things are happening quickly in this area. The Model 3 I have has a 310-mile range, and all of the cars coming out in 2019 boast a 250+ range. 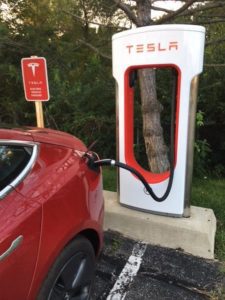 First and foremost, if you have a garage, getting a simple 220V plug installed at home – same as your oven and dryer runs on – means you charge at night while you are sleeping; very convenient. This doesn’t help condo and apartment dwellers, but solutions are coming.

When I looked at Tesla’s Supercharger network in 2015 – to use on trips that exceed the range – there were none in West Virginia along my normal route up to visit my parents in Pennsyltucky. When I looked again this past June, there were 3 superchargers in West Virginia and a total of 7 between my house and my parents’ house 789 miles away. Quite an improvement! To be sure, charging on a trip takes longer than a quick fill-up at a gas station (charging from 0 to 80% full takes about 30 minutes today; Tesla’s plan is to get that down to 15 minutes in the next 3 years), and clearly chargers aren’t ubiquitous like gas stations. However, with a Tesla and a little bit of planning, you can confidently take a trip anywhere in the U.S.

The next evolution in charging infrastructure is for the other EV manufacturers to build out their own version of a supercharger network – either themselves or through third parties. At this point in time, Tesla has a huge advantage over everyone else in this area.

Competition fosters innovation, lower prices, and more availability. Tesla is the 800-pound gorilla in the EV space, although many automakers have announced EVs (in addition to the more affordable EVs listed earlier, Jaguar, Mercedes, BMW, Porsche, and Audi have announced luxury EV models). Although competition is definitely heating up, most EV experts expect Tesla to continue to lead the pack simply because all they sell is EVs – so their livelihood depends on it (Electric Car Rivals Revved Up To Challenge Tesla).

The times are definitely a-changin’ with electric vehicles. If you’re in the market for a new car in the next year, I would encourage you to take a serious look at EVs.