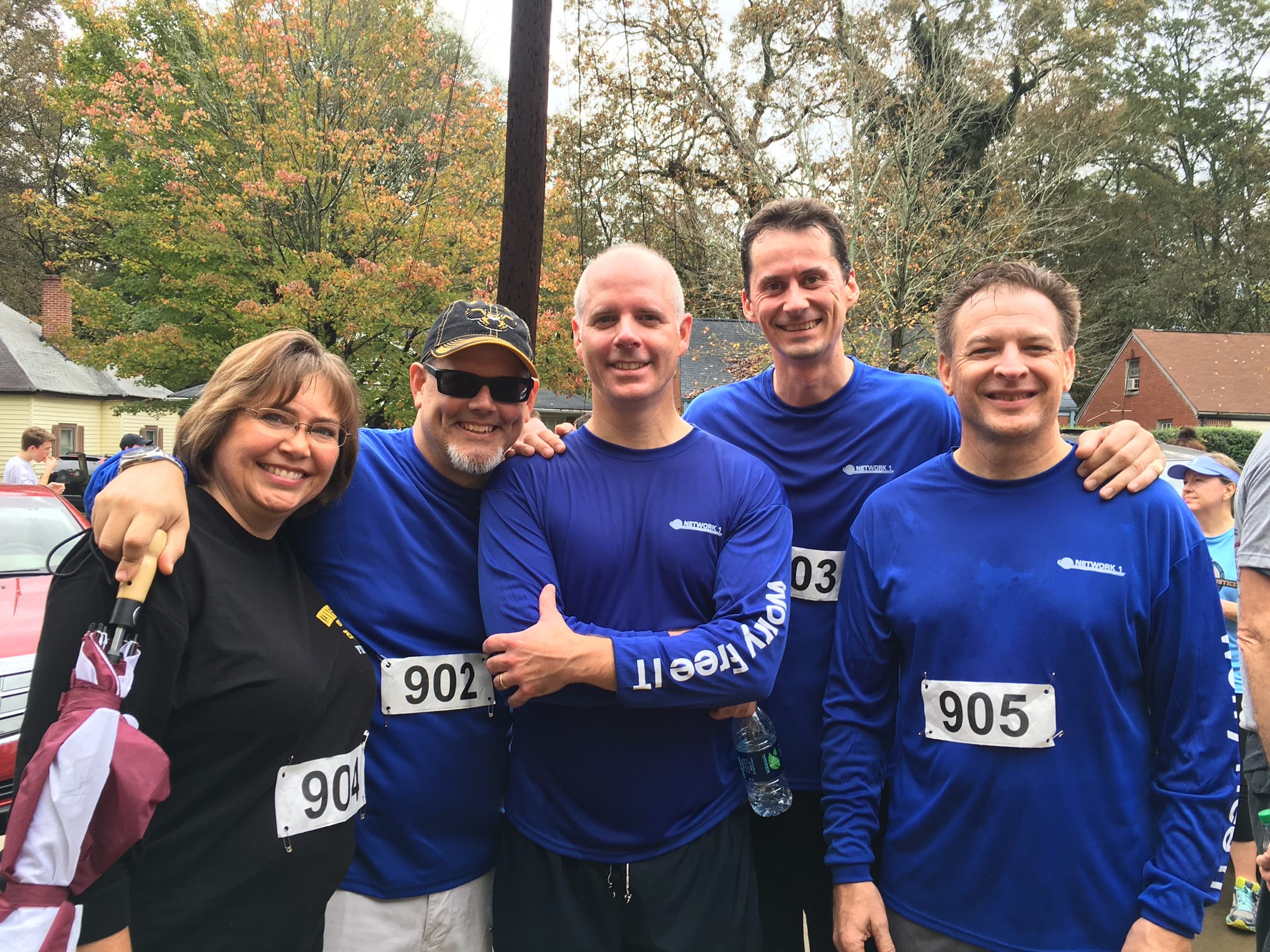 Each of the last four years Network 1 has sponsored the Atlanta Legal Aid Society’s Run for Justice. This is a worthy cause and a fun, social event where we get to see many of our AALA friends and law firm clients (the Ken David & Associates crew was out in full force again this year).

For me, personally, the Run for Justice had become a “Walk for Justice” over the years. 2012: I ran about 90% of it (and was sore for 3 days afterwards), 2013: I ran about half of it (the downhill sections), 2014: I walked 98% of it. Not that there’s anything wrong with walking – I had great conversations with other walkers. However, as a challenge to myself, I wanted to see if I could run the entire course this year. To make sure I reached my goal, ten weeks before the run I did two things: 1) I publicly stated, to my team and several others at an AALA meeting, that I was going to run the entire race this year, and 2) I downloaded the Couch to 5K app onto my iPhone.

I had heard about this app from my daughter’s college roommate, Kelly. She was training for a 5K and had never done one before. She said it was easy with the Couch to 5K app. I was intrigued. Although I was real active in my 20s, 30s and early 40s – doing several triathlons, a marathon and several half marathons – I was now out of shape and older and was concerned about injuring myself during training.

The C25K app has been designed to get almost anyone from the couch to running a 5K, at a 10 minute per mile pace, in eight weeks. The app is free and the user interface is easy to understand. There are three training days per week and, as the name implies, the app starts you off slowly. The first workout was for 30 total minutes: a 5-minute walk, then alternating 60 second jog and 90 second walk for 20 minutes, and then a 5-minute walk to finish up. These workouts ramp up slowly – see the screen shot from the first workout of week 3 as an example: 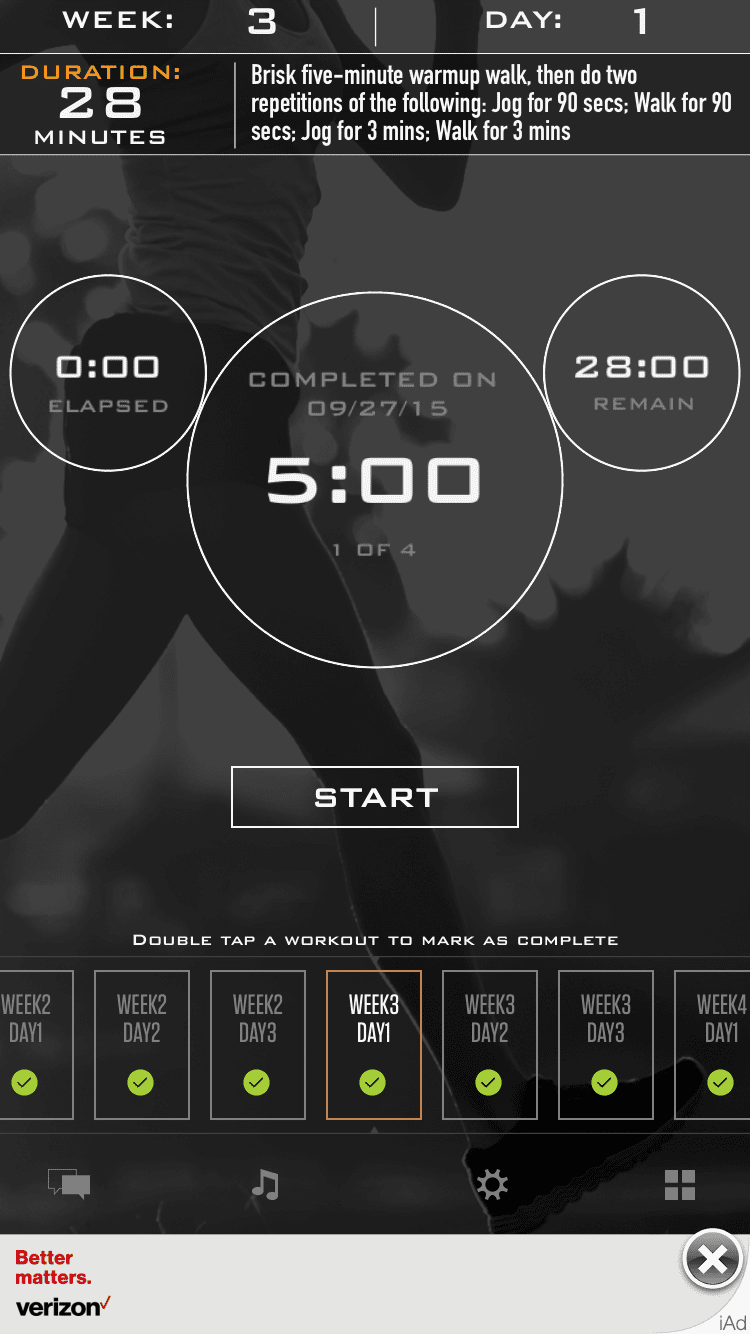 Some days I was pushed, because I was so out-of-shape, but I never got injured. During the second workout in week 5, I got surprised when the app announced that I needed to run for 8 minutes when the previous long run was 5 minutes. I wasn’t mentally ready for this jump but I gutted it out (can’t argue with my coach… although I did curse her under my breath J). After that incident I learned how to scroll forward to preview the next workout before I got started. 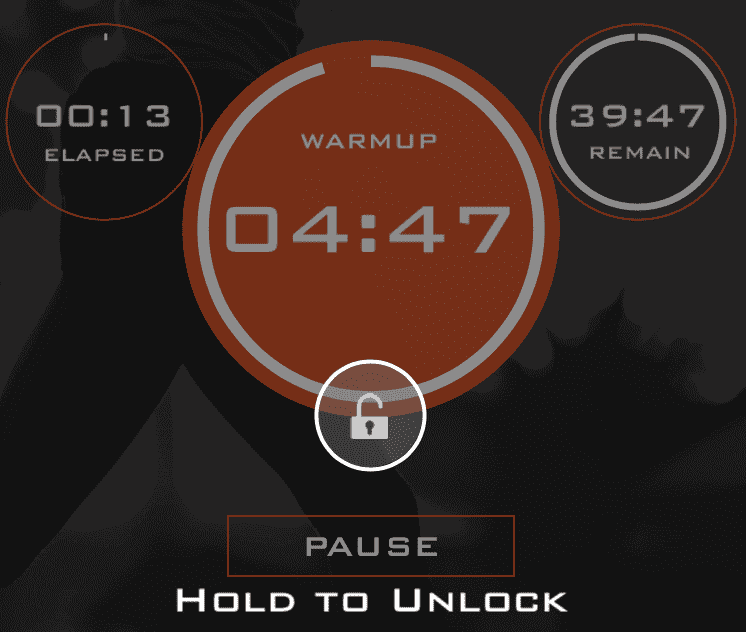 The other user hint I need to pass along is the lock button; I discovered this during my second workout. Like many people, I enjoy music while I run. After launching the C25K app and pressing “start” for my workout, I then selected a favorite playlist, started listening, locked my phone, and put it in my pocket. After what seemed like more than 5 minutes, I noticed that my coach, with her pleasant and persistent voice, had not chimed in to say, “start running.” What I discovered was that the C25K app does not continue to run in the background when the phone is locked. However, C25K has a lock built in to the app. After I learned that, I would start my tunes, launch C25K, begin my workout and press “lock”, then put the phone in my pocket.

I’m happy to report that I met my goal of running the entire race without walking a step… although I was going so slowly up that killer hill in the beginning that it seemed like walking. I’m doubly happy to report that, because of my Couch to 5K training regimen, I stayed injury-free and wasn’t sore the next day.

Now I need to schedule that next 5K so I stay motivated to run on a regular basis. Anyone know of a fun run on New Year’s Day?