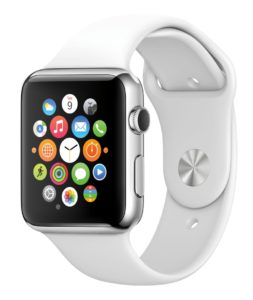 Apple announced more information yesterday on the Apple Watch. There are a lot of places on the web that provide specific information; my favorites are listed below. For this article I want to focus on one question: Should I buy the Apple Watch now?

That’s the question I’ve been asking myself. While doing my research over the last 24 hours I settled on five main criteria that helped me answer that question for myself:

Before we get into scoring yourself on each of the 5 criteria, let’s consider this question: is the Apple Watch more like the iPod, iPhone or iPad?

Apple Watch: More like an iPod, iPhone or iPad? 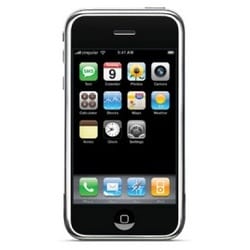 The iPhone is a phone like the Apple Watch is a watch. Yes, you can put the iPhone up to your ear and make a phone call; however, calling it a “phone” is misleading. Likewise, you can put the Apple Watch on your wrist and use it to tell time. However, calling it a watch doesn’t do it justice. In that sense, the Apple Watch is similar to the iPhone. They are both in categories of devices – phones and watches – that are ubiquitis in the marketplace, yet they take those devices to a completely different level. Sales of the iPhone ramped more quickly than the iPod. It first went on sales on June 29, 2007 and only took 74 days to sell the 1 millionth unit. Through 2008 a total of 16 million iPhones were sold and through 2013 a total of 430 million iPhones were sold.

Like the iPod entering the existing, but small, market of digital media players, the iPad entered the existing, but relatively small, market of tablets. I must admit that when the iPad was announced on January 27, 2010 I thought it had missed the mark. I couldn’t see why Apple was so excited about it; I thought it would only appeal to a small, specialized niche. Yeah. Don’t take investment advice from me either. Granted, when the iPad was announce, Apple already had back-to-back blockbuster hits with the iPod and then the iPhone. The iPad started shipping on April 3, 2010 (can you believe it was less than 5 years ago?) and took only 28 days to sell 1 million units. By the end of 2010 a total of 15 million iPads were sold and through the end of 2014 a total of 246 million iPads were sold.

So what’s the verdict? I think the Apple Watch, from a market standpoint, is most similar to the iPhone in that it’s entering a big, ubiquitis market (wrist watches) that has existed for a long time with something that really isn’t a wrist watch. However, from a sales perspective, it will be most similar to an iPad: entering the market on the heels of excellent predecessors plus having to achieve sales without subsidies (the old-school iPod had to stand on its own too while the iPhone sales price was typically subsidized by the wireless carriers.

Bottom Line: I’m predicting the Apple Watch will get off to a fast start (after all, there are a lot of Apple fans out there) and will probably break the iPad’s record by selling 1 million units in less than 28 days. Then, sales will moderate until the product category matures some more and will take off when the Apple Watch 2 is announced in September, 2016 (you read it here first).

Score Yourself on the “Buy Now vs. Buy Later” Quiz

As an example, here is my own personal score plus fictitious scores from (mostly) imaginary characters I’ll call “Bob” and “Sally”.

1). Are you an over-the-top Apple fanatic?

Note: if you gave yourself a “10”, go immediately to the closest Apple store and start waiting in line. 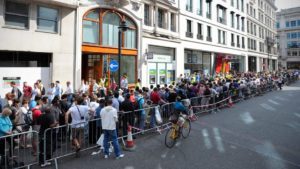 2). Are you a watch collector (think fashion)?

4). Is your time valuable enough that saving 2 minutes / day would be worth it?

Here are those links I promised earlier; use it to learn more of the specifics about price, positioning, availability, applications, etc.

Good perspective from a BuzzFeed Reporter

Focus on the mundane; not the hype

Apple Watch versus the competition